T.S.Eliot’s J.Alfred Prufrock said that he measured his life in coffee spoons, but perhaps many of us also count them by World Cups or Olympic Games, international sports events held every four years which receive unavoidable media coverage.

In childhood, I was vaguely aware of the 1964 Tokyo Olympics (with the BBC’s distinctive Euro-Oriental theme music) but my first proper Games was Mexico in 1968. In being chosen to host Olympics and World Cup consecutively, Mexico must have been in a similar position to Brazil now: politically or culturally fashionable. The major difference then of course was that TV programme hours were much fewer so a breakfast time programme of sports highlights was a real treat before school. 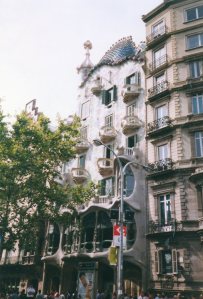 The next few Olympics shone for different reasons. Moscow in 1980 for the athletic rivalry between British pair Steve Ovett and Sebastian Coe, which, as mentioned in an earlier post, I’ve always credited as one reason for the popularity of the film Chariots of Fire. Los Angeles in 1984 for the highly dramatic track meeting between American Mary Decker and South African Zola Budd. Barcelona in 1992 was significant if only for the radio report just before it started which drew my belated attention to the fact that it was a place of international art and culture which perhaps I should visit. 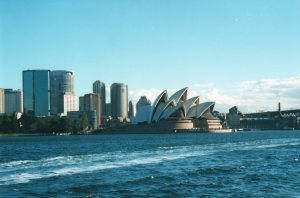 Sydney in 2000. The sailing took place in the bay and the marathon route followed the coast around. 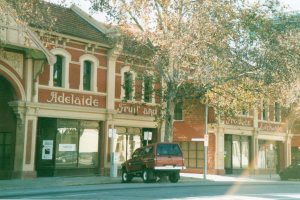 By coincidence, my first visit to Sydney was just a few weeks before its 2000 Games. Inadvertently on TV I caught one episode of a timely satirical comedy The Games. Although I knew nothing about the Australian political context it was still easy to appreciate and I was struck ten years later how similar it was to the BBC’s 2012. A visit to Adelaide coincided with the visit of the Olympic torch relay and made me surprised that such a small city centre might host this key event. Twelve years later, the British torch relay was winding through dozens of smaller towns before the opening ceremony. 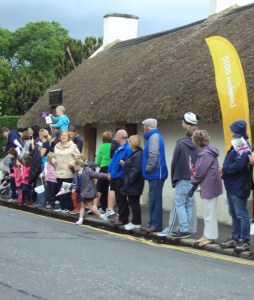 Spectators await the arrival of the 2012 Olympic Torch as the relay approaches Burns Cottage, Ayr.

Although the era of multi-channel TV has hugely increased the number of sports and events you can see throughout the year, the Olympics does not seem to have lost its special celebrity among the younger generations of journalists and broadcasters. It is part of a tradition dating back to 1896, but it is certainly helped by the fact that the performances of UK sportsmen and women (or Team GB, as we are encouraged to call them) have been improving in recent times, with the concurrent politicians’ response of bestowing knighthoods and other honours. 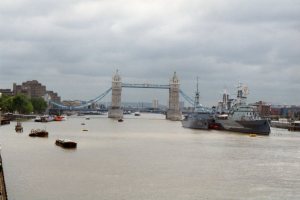 London in 1996. Manchester had just failed in a bid to host the Olympics, and the Millennium rather than the Olympics was the imminent event in London’s sights.

Younger generations have a tendency to exaggerate their judgment and apply hyperbole to their limited knowledge (mine certainly did) so I was impressed that journalist Tom Fordyce based his article on the currently pressing issue on who has been the greatest ever Olympic athlete from a decently broad perspective, mentioning Paavo Nurmi and Fanny Blankers-Koen as well as the more obvious Jesse Owens and Nadia Comeneci.

Some Olympic sports must be seen as out of date, though. Archery, shooting and fencing were once regarded as important skills for a military gentleman, but are surely inappropriate in an era when all around the world we are trying to reduce violence and its glorification.

His first lines are about the Parliament’s architecture, which certainly caused controversy well before it opened. A building of “curves and caverns” rather than of “Gothic grandeur” or of “imperial marble”, Enric Miralles’ design probably still incites comments among visitors, although I feel the two views you normally see on TV, the chamber and that internal staircase where TV addresses and interviews take place, always look bright and attractive.  I was however quite shocked to find on my single visit that the main public entrance is so much lower and darker than expected (partly because of the inevitable space for security precautions).

The debating chamber was built in a semi-circle to distinguish it from Westminster and to discourage the aggressive adversarial practices of the UK Parliament, which are so often criticised. The individual workstations do give the impression of a modern grown-up office space rather than merely an arena for rhetoric and heckling. Sitting space is more civilised and generous. Despite all this, and its smaller number of members, the Westminster habits of shouting and cheering and blaming and insults appear to have continued. Certainly it provides copy for the journalists, who are after all among its most regular visitors.

Elections to the Scottish Parliament are different from those to the UK Parliament, being by a form of proportional representation. However many other features are similar to Westminster.  The elected representatives are entitled MSPs (Members of the Scottish Parliament) which is perhaps a bit close to MPs (Members of (the UK) Parliament). The group of senior government ministers had always been called the Cabinet, so it was perhaps no surprise when the SNP later exalted these ministers to the grander Westminster title of Secretary. The weekly First Minister’s Question Time is constructed in a similar adversarial way to Prime Minister’s Questions in the House of Commons – “it is the most popular session of Parliament and demand for tickets is extremely high”, says the Parliament website presumably without irony.

In Morgan’s poem, some of his strongest phrases are directed towards political misbehaviour. He warned against “fearties…procrastinators….forelock-tuggers”, and, especially, those prone to explaining inaction and incompetence with “the droopy mantra of ‘it wizny me’”. He wanted elected members to be “open and adventurous”.

Whether Morgan’s wishes have been granted or not may depend on your political opinion. I tend to feel that on many occasions members of all political parties have been guilty of cowardice, inertia and making excuses. An individual’s statements can change dramatically depending on whether he or she is in power or in opposition. The political party which is most often in power in Scottish local government tends to blame its inertia on the party which is currently in power in the Scottish Parliament which in turn tends to blame either the party of local government or the different party which is in power in the UK Parliament. Such unsatisfactory behaviour probably applies in other countries’ governments, but not all have Morgan’s stirring words to inspire them.

I remember, in the earlier years of the Scottish Parliament, in answer to some public criticism about whether this new assembly was achieving anything at all useful, the then SNP leader Alex Salmond replied to the effect that there was a difference between a Scottish Parliament and a Scottish government. Certainly, after 17 years of a Scottish Parliament and the major devolution of government functions which have involved all political parties, there is, regrettably, plenty of evidence that poverty, homelessness and low educational achievement continue in many parts of Scotland.

Is it an inevitable result of growing old that you find your elected representatives less and less satisfactory? When young you may feel angry about injustice and poverty but still suspect that perhaps those in power really are more experienced and more knowledgeable and wiser and perhaps those social problems really are as hard to fix as they say. When you’re older than most of your elected representatives you know that that is unfortunately not true and that failure is caused by incompetence, lack of effort or inappropriate political choices.

Once long ago I was attracted to the example of Cincinnatus, the Roman who was willing to give up his power as a dictator once his designated task was complete and to retire to his farm. So different from modern political careerists who are so eloquent at self-justification!

Maybe the answer is to apply the ideals of Edwin Morgan’s poem to ourselves, each in our individual social and public lives?

"It's the most beautiful ugly sound in the world."

On An Overgrown Path