The modern shape of the news

“Brexit continues to suck the life out of the British news cycle,” said journalist Andrew Neil on the BBC programme This Week recently. He might reasonably have omitted the last two words of that sentence.

The UK’s decision to leave the European Union after 40 years has been the main story for all of its news media for many, many months.

I am old enough to remember that the issue of membership of what was first called the Common Market has long been an issue of discussion and even controversy in UK politics. Margaret Thatcher’s successful Conservative governments of the 1980s frequently criticised the organisation even while they maintained membership. Divisions within the John Major government of 1992-1997 over the issue of the Maastrict Treaty led to the election of Tony Blair’s Labour government.

The major difference today is how much more ubiquitous and dominant are news programmes within national television. In the UK thirty years ago each weekday had about five hours of news within 36 hours of programmes on two BBC channels; nowadays we have the two 24-hour TV news channels provided by Sky and the BBC, plus nine hours of news each weekday on the two main BBC channels as well as the regular news bulletins on the other networks.

Both BBC News and Sky News tend to follow each other closely in the stories they cover and how they prioritise. The topics are often London- and Westminster-centred; also acts of violence, perceived terrorism, natural disasters. This has led to a climate where the same few news stories are endlessly repeated and the way they are reported uses the same language and the same people and the same video footage.

24 hours a day of TV is a long time to fill. So other resources have emerged to supplement. New media organisations like Spiked and Novara Media sprang up alongside the long-established but less popular print newspapers. Think tanks with different interests and shades of political opinion conduct research and write articles which the news media pick up on. Each of the two news channels has devised many programmes of political conversation. Unfortunately these have learned to prefer confrontation and shouting rather than clarity and balance. And there is “social media”, especially Twitter, which staff of both TV news and print newspapers have long used as a major source and which they also have adopted as their own principal broadcast conduit. The journalists do less independent research and reporting but more commentary and their language has become less nuanced and less temperate and less impartial.

We had political divisions in the past, of course. Industrial disputes always polarised opinion, especially the miners’ strike of 1984-85.  The British military interventions in Afghanistan and Iraq led to sustained protests and arguments.

So, what about the discussion over leaving the European Union? It’s surprising to remember that during the campaign before the referendum in 2016, the word “Brexit” was almost never used: we all just talked about leaving or staying in the EU. Only when the incoming Prime Minister Theresa May said “Brexit means Brexit” did the word start to gain popularity and notoriety. Although, as conceded above, it is certainly an issue which divided opinion within political parties and within different geographical areas in the past, many of us have still been shocked about the extent to which it created hostility and hysteria and accusations of treachery within all age groups and social groups. Especially since the poverty and social problems which people were angry about had obviously been caused not by the EU but by the neglect of successive national governments, both Labour and Conservative. The TV producers’ fondness for headlines like “Brexit Crisis” and “Brexit Britain” and for raised voices and personal insults has allowed this evidence to be ignored, and for the actual closeness of the referendum vote to be forgotten.

A robustly free and impartial press is the feature of a just society and Amnesty International and kindred organisations remind us that in other countries more journalists are being intimidated, imprisoned and killed than ever before. However, I do feel that a large part of the blame for the anger, aggression and fear around “Brexit” can be fairly laid with our media, principally the television news programmes. Why might they have behaved as they have? Many possible reasons: technological changes within their industry, difficulties in coping with these, a long-standing gluttony for political drama, the laziness of individual executives and producers. What I am quite sure about is that we are not living through the finest hour in the history of the UK free press.

A perceptive reminder came recently from the Canadian academic Steven Pinker. Why, he wondered in his recent book, are people so unhappy, when all the evidence shows that the whole world is wealthier, healthier and more peaceful than ever before?

His answer: because the picture of the world which the media presents is so different. “Journalism has a built-in bias towards the negative, in that it covers events, and it is easier for something to go wrong very quickly rather than right very quickly.” An explosion or a terrorist attack can break out rapidly, but improvements in well-being arrive more slowly and gently and so are very seldom deemed worthy of a news report.

The influence of Katherine

The name of James Hilton is rather forgotten now, his having died in 1954, but novels like Lost Horizon and Random Harvest were popular enough to be transferred quickly by Hollywood into films which were regularly on TV screens during my youth. The Hilton novel which has held its reputation longer than others is possibly Goodbye Mr Chips. Its 1939 film version, directed by Sam Wood, earned six Oscar nominations and a Best Actor prize for Robert Donat. Stuart Orme’s British television version, first screened in 2002, is still regularly shown, at least partly due to the continuing popularity of its lead actor, Martin Clunes.

Hilton’s novel tells the story of the 60-year long career of a schoolteacher named Chipping at a boys’ boarding school called Brookfield. This is another one of those narratives through which the events of World War One cast a long shadow. A startling scene towards the end has Brookfield attacked by enemy aircraft and describes Chipping’s courage and humour in the face of this. It is sobering to realise that, just a few months after the first screening of Sam Wood’s film, and even before Robert Donat had received his Oscar statuette, its audience was facing, in real life, a second war.

More significant even than the 1914-18 war for the lead character is the period of two years during the 1890s. During this time, Chipping, by now in his mid-40s, meets on holiday a young woman called Katherine Bridges. They marry and enjoy a life together which is happy but tragically short.

While Chipping, or Chips, the nickname given by Katherine, is present throughout the whole narrative, Katherine’s own presence is brief. The allegorical significance of her surname is never openly commented on, but it seems likely that Hilton wants the reader to see Katherine as the force which directs and guides the middle-aged Chips to the second, more rewarding, part of his life.

In the novel Chips is trying to save Katherine from a mountain ledge but he hurts himself in the process: “Thus he found himself the rescued instead the rescuer”. In the 1939 film director Sam Wood shrouds Chips in mists on the mountain and it is Katherine’s voice which guides him to a safe place. 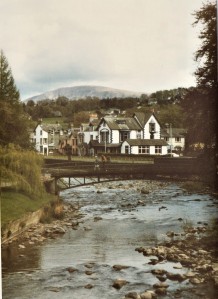 A scene from the Lake District photographed in 1996. Chips meets Katherine while on holiday there. “He went up… with Rowden, a colleague; they walked and climbed for a week, until Rowden had to leave suddenly on some family business. Chips stayed alone at Wasdale Head, where he boarded in a small farmhouse. One day, climbing on Great Gable, he noticed a girl … ”

Chips has always been shy of women, and Katherine is more intimidating than most. She is an example of “that monstrous creature… the New Woman of the nineties”. She is a political radical who believes women should have the vote, an admirer of Shaw and Ibsen and William Morris, who enjoys cycling and is unafraid to visit a single older man alone in his lodgings. However she also believes that teaching is a noble and important profession and is attracted to Chips’ gentle manner and to his opinions which, although old-fashioned, are held honestly. To the modern reader it still seems an unlikely match. The 2002 TV version felt it necessary to add a scene where she leaves Chips a book by Shaw as a farewell gift, which encourages him to cycle after her in a classically bold romantic gesture. Her fatherly group leader cautions, “I hope you are not going to forget yourself, my dear”, to which she calmly replies “I believe I already have”.

Married and at Brookfield, Katherine is popular with other teachers and all the pupils. Hilton says she is also popular with other teachers’ wives – but both TV and film versions felt it too complicated to introduce such characters. The novel mentions the school concerts and the prize-giving garden party, the TV version shows afternoon tea and picnics. She organises a football match between Brookfield and a mission school in working-class Poplar in east London, which is remembered years later by one of the Poplar boys when an adult. (The TV producers perhaps felt there had been enough scenes of sport already when it was decided to change the latter social inclusion initiative into a dance with a nearby girls’ school).

Hilton says that Katherine often asks Chips to be lenient in dealing with pupil misbehavior – because she understands that the boys had often been sent to boarding school against their will and that living together with others was “an unnatural arrangement” – but she is described as shrewd enough to realise that leniency is not appropriate in every situation. The TV version shows her use the Aesop’s fable of the sun and the north wind in her argument against “uncivilized” bullying to the shocked Brookfield headmaster, which the latter recalls when he compliments her later at the mixed gender dance.

Katherine’s death in childbirth is dealt with briskly by Hilton and in both adaptations. Chips refuses to take any time off after the tragedy and returns immediately to his class. Because it is 1 April, the pupils have already organized an April Fool’s joke which he tolerates. Hilton adds that Chips “nearly” says “ ‘you can go to blazes for all I care. My wife is dead and my child is dead and I wish I were dead myself’ ” –  but he is held back by social formality and professional dedication.

The story is still only half-way through, and Hilton makes clear that Chips’ continuing popularity and status and success within the school is due to the influence of the deceased Katherine. So although one theme of the story could be said to be tradition or service or the English class system, another could certainly be the positive influence which one person can exercise in unlikely circumstances when will and effort are applied.

For me, Hilton’s most insightful description is that Katherine’s “radical-socialist… idealism” has combined with Chips’ more conservative “maturity” to produce “an amalgam gentle and wise”. With the new century, despite the pain of his bereavement, Chips gains “a mellowness (and) harmony” and becomes “supremely and confidently himself”.

"It's the most beautiful ugly sound in the world."

On An Overgrown Path